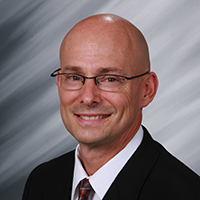 Other than the 8 years he spent in college, Tom is a lifelong Sterling resident. Having attended a few undergrad schools including UW-LAX, BYU and SVCC, he graduated with his Doctorate of Chiropractic from what is now National University of Health Sciences in Lombard, IL and came back to private practice in Sterling in 1986.

Since then, he has been active in Sterling Noon Rotary, S-RF Jaycees, Sacred Heart Church and Youth Group as well as having served the American Chiropractic Association as an alternate delegate since 2006. In 1995, Tom was elected to a six year term as SVCC Trustee, happily serving during the time that the initiative was passed to make sure that all community college associate degree credits transferred fully to any State of Illinois University. Most recently, he was excited to join the SVCC Foundation board in 2018.

Tom and his wife Michelle have three grown children and a daughter-in-law; Gavin and his wife Lynsey, Elliot and Alena. All four of them have either graduated/attended/or taken classes at SVCC!